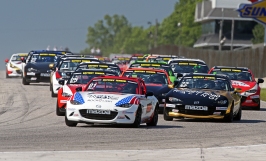 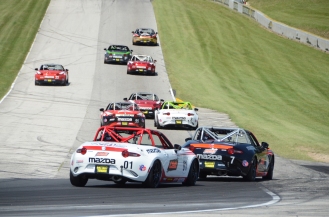 The Mazda MX-5 Cup kicked off a new era for the series with an all new car this year. The first two doubleheader race weekends have seen close competition with four different winners. This past weekend the teams headed to the iconic and fan-favorite  Road America, in Elkhart Lake, Wisconsin, a mere 2.5 hour drive from Chicago.

In Saturday’s Round 5 race we saw 30 minutes of intense race action before finishing under yellow with Robby Foley (No. 63 Mazda Motorsports/Atlanta Motorsports Group) scoring the win, his second of the season.

An incident in turn one in the final 10 minutes of the race eliminated pole sitter John Dean II (No. 16 Mazda Motorsports/Sick Sideways Racing) and rookie Mark Drennan (No. 50 WindingRoadRacing.com/TFB Performance) leaving Foley to fend off Nathanial Sparks (No. 8 Sick Sideways/OOTSK Performance) for the win.

In Sunday’s Round 6 race, Nikko Reger (No. 01 Copeland Motorsports/Rockstar Wigs) from Houston, Texas, was able to fend off the pack and secure his second win of the season. The win moved him into fifth place in the season championship.

Reger started the race in pole position and did not look back. Combined with a round four win at Watkins Glen, he joins Robby Foley as a two-time winner this season.

With the most laps led, Reger’s performance seemed nothing short of dominant, but the win was far from easy as the lead draft rarely fell below five cars, and was often a freight-train of eight or more cars.

Series newcomer Tim Barber (No. 22 Windingroadracing.com) also had a stellar performance and narrowly missed the top spot by a mere 0.116 seconds. The top six finishers were covered by just 2.181 seconds. Dean Copeland rounded out the podium with a third place finish. His finish increases his points lead in the championship and the pursuit of the $200,000 Mazda Road to 24 scholarship.

After six races, Dean Copeland extends his points advantage by eight points. Copeland is yet to win a race but consistent podium finishes have allowed him to garner the most points in the series.

Rounds seven and eight of the MX-5 Cup will be at the Canadian Tire Motorsport Park during the IMSA weekend, July 8-10.